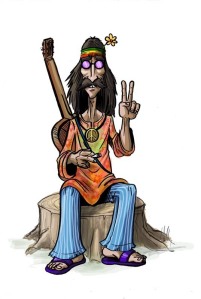 Is this what you were expecting?

This is what a journalist told me a couple of years ago when I met with her to do an interview about the group “Charleston Veggies & Vegans.”

She had apparently been expecting one of the many vegan stereotypes that are out there to show up.

You know what I mean…

I have to admit before I learned more about the vegan lifestyle (and ultimately decided to live it!), I kind of thought all vegans were like the one in my college cafeteria: wild hair, piercings, tattoos, edgy outfits, message buttons.

But, just like all stereotypes – positive or negative – even though there might be a tiny kernel of truth in there somewhere, they just don’t apply to everyone in a group.

The stereotypes that are out there are being broken every day – by people like you. And me. And people in your life, like your neighbor or colleague, who you might not even know are vegan.

The point is you can be who you are right now and be vegan too.

You don’t have to make any big changes to your appearance or your demeanor or your friends.

You just have to be willing to make a huge difference in the world, be it for the animals, our environment, or your own health.

And that difference is easier and more fun to make than you might think.

To breaking the mold!

P.S. Let me know in the comments below if you have met a vegan who has broken a stereotype for you!

11 thoughts on “So you’re not a crunchy hippie?”