So this won’t actually be the dictionary definition of an ode:

a lyric poem usually marked by exaltation of feeling and style, varying length of line, and complexity of stanza forms

But it will be a piece in which I express my strong feelings of love for…a restaurant.

A Charleston trio of family-owned-and-operated businesses, Dell’z Deli, Dell’z Vibez and Dell’z Uptown are this vegan’s version of paradise.

They make it easy to eat in a compassionate, healthy, and Earth-friendly way.

The Deli was the first one to bless Charleston with its presence in 2010, opening in a hole-in-the-wall location on the corner of Cannon and King downtown.

Founded by Maudell “Dell” Grayson with the help of two of her kids, this place immediately stole my heart when I saw the sign painted on the front door:

As you walk in, you’ll probably hit someone with the door (because the small space

is almost always packed), and you will be personally welcomed by an affectionate “Hey, how you doin’, baby? Come on in!” from Dell if she’s there (which is almost all the time).

The inside is cozy, brightly painted, and completely scrawled with devoted diners’ signatures from floor to ceiling.

Though not exclusively vegetarian or vegan, the Deli has so many options on its menu, it will leave you happily deciding as you stand squished between the outside wall and the small counter (and you will probably be the next one to be hit with the door). 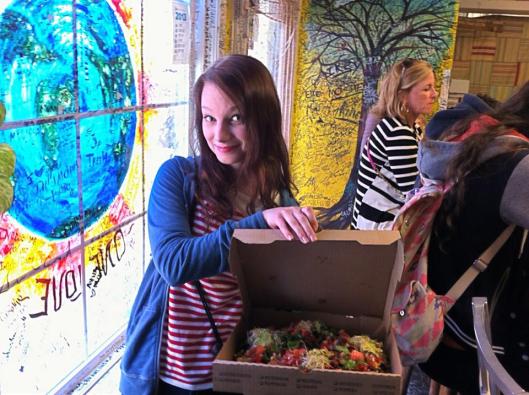 Here’s my sis standing in the tiny, beloved space. See all the wall art?

But being squished as you decide on your order isn’t a problem; everyone’s friendly, so I’m totally ok with giving up some personal space in exchange for phenomenal food!

How can I even start to explain? I know! When I took my first-ever bite of the bean & rice bowl, which looks like this:

You can even get vegan cheese on it if you want because they carry Daiya!

Other “Ode to Joy”-worthy meals I’ve had from Dell’z Deli include: 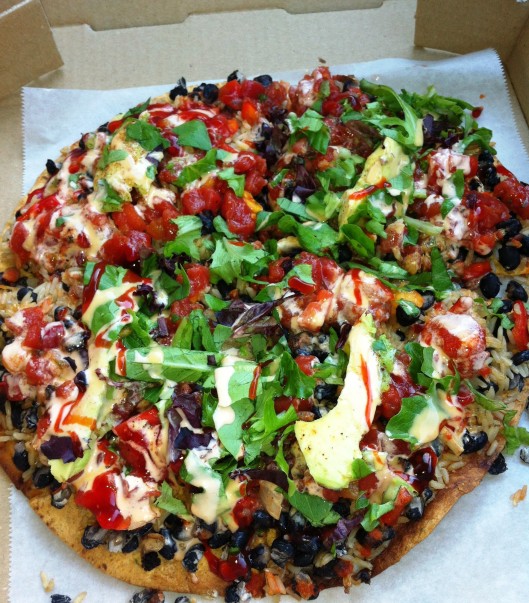 …and more to-go Bean & Rice bowls than I can count (’cause they’re my fave).

With daytime and late night hours (as in ’til 3am kind of late), you can get your Dell’z Deli fix whenever you need it. And did I mention it’s affordable?

You simply can’t beat this place. 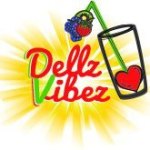 Next up on the Dell’z scene, in 2012, came Dell’z Vibez – a juice and smoothie bar right around the corner from the Deli.

Run by Dell’s daughter Nikki, this place has an impressive menu of healthful and delicious libations.

I added spinach for an extra-nutritional punch:

It worked! I felt like Wonder Woman after drinking it.

Between the huge selection of hot and cold drinks and smoothies, the free wi-fi, and the uber friendly staff, you could spend all day here!

Located on Rutledge Ave. and with a convenient parking lot in the back, this place has plenty room to sit down and eat-in.

So it’s got the same hole-in-the-wall feel (which I’m using as an endearing term) with more space. 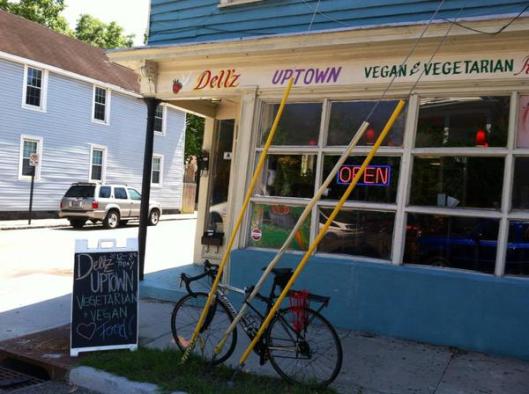 Their food, which is all veg or vegan, is just as joy-inducing as the Deli’s, with an expanded menu.

Make sure to get their signature My Thai Bowl: 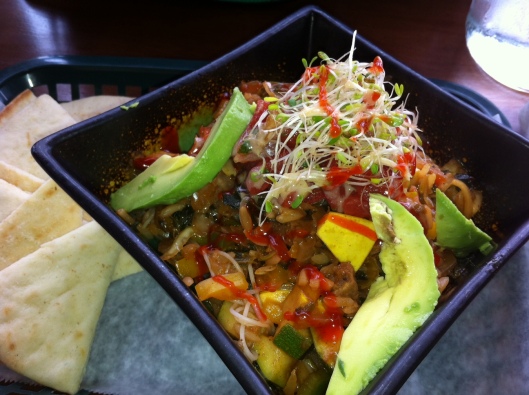 I also loved my Queens Bowl:

And they have a bean & rice bowl too!!

They’re open for breakfast, lunch, and dinner, and it’s BYOB (or wine)! On Friday nights, they apparently have live music and encourage dancing…can’t wait to go next time!

Moral of this story…I mean, ode?

Get thee to a Dell’z location as soon as humanly possible and be ready to hear some Beethoven when you take a bite.

P.S. I added some art of my own to the Deli. Make sure to add your love to their walls when you go!

P.P.S. All three of the Dell’z joints are on my list of recommended Charleston Veg-Friendly restaurants, which can be found here!